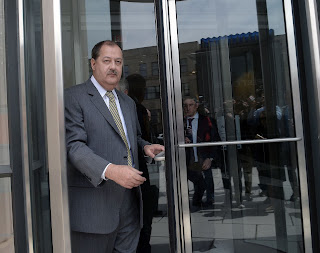 The Trump administration Friday urged the U.S. Supreme Court not to hear former Massey Energy CEO Don Blankenship’s appeal of his conviction for conspiring to violate federal mine safety and health standards at Massey’s Upper Big Branch Mine, where 29 miners died in an April 2010 explosion.
U.S. Department of Justice attorneys filed a legal brief that asked the court to deny Blankenship’s petition seeking further review of his case. Blankenship had already served a year in federal prison, the maximum allowable for his conviction, but has been waging a self-funded public relations campaign saying he was wrongly convicted and arguing his widely-discredited theories about the cause of the Upper Big Branch explosion.
The Justice Department response comes three months after Blankenship’s defense attorneys filed their Supreme Court petition and follows the department twice receiving extensions of time from the court.
Blankenship’s lawyers argue that the 4th U.S. Circuit Court of Appeals, which upheld his conviction, was wrong on two legal points: They say that U.S. District Judge Irene C. Berger incorrectly instructed the trial jury that Blankenship’s “reckless disregard” of federal mine safety and health standards amounted to the criminal willfulness needed for a conviction and that Berger was wrong to deny the defense the chance for a second cross-examination of former Massey official Chris Blanchard, a major government witness.
In their 31-page response, the DOJ mostly repeats the findings of the appeals court and tells the justices that the 4th Circuit and Berger were correct.
Regarding the definition of criminal willfulness, the DOJ brief says that the 4th Circuit correctly held that a mine operator willfully violates a safety standard if he either knows that his conduct violates that standard or recklessly disregards the standard’s requirement.
A footnote says that Blankenship “could not plausibly argue” that he lacked knowledge of relevant safety standards, because “he received and reviewed ‘daily reports’ of citations” at Upper Branch that specifically identified the mine’s safety violations.
Justices have not yet decided if they will hear the case, but a Supreme Court petition is a long short. The court hears only about 80 cases a year out of the 7,000 to 8,000 appeals that are filed annually. About another 100 cases are decided by the court without a hearing, according to the court’s website.
READ FULL ARTICLE HERE>>>
at 11:16 AM

Email ThisBlogThis!Share to TwitterShare to FacebookShare to Pinterest
Labels: Blankenship, Trump Administration, US. Department of Justice