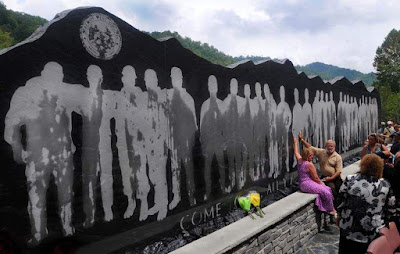 Incredibly, Republicans who control West Virginia’s Legislature want to weaken coal mine safety policing. One bill, Senate Bill 582, would strip state inspectors of the power to issue violation notices to mines unless they can prove there’s “imminent danger” of death or injury. Instead, the safety agents could issue only tepid “compliance assistance visit notices.”
“It completely guts the state laws,” United Mine Workers union safety director Josh Roberts said. “You’re taking back decades of laws.”
Mine safety crusader Davitt McAteer said the GOP bill is “breathtaking in scope,” adding:
“It’s shocking that, after all these years and the number of West Virginians who have died in the mines, for the state to even consider this.”
The New York Times said of West Virginia’s backpedal:
The Upper Big Branch Miners Memorial is unveiled in Whitesville in 2012.
KENNY KEMP | Gazette-Mail file photo
“President Trump’s vow to bring back the coal industry’s heyday is a delusion. But it’s already inspiring Republican legislatures in Appalachia to resurrect a grim element of those boom times: loose safety laws that endangered miners’ lives and protected owners’ profits.”
The national newspaper said the Trump administration is “stocked with anti-environment industry sycophants” who want to enrich mine owners. “To that end, it is moving to help surface mine operators by eliminating protections for Appalachian streams and hamlets inundated by mine wastes.”
It continued: “In West Virginia, the Republican-controlled Legislature is aiming to weaken mining law by replacing actual safety inspections with something termed ‘compliance visits and education.’ State safety and health standards, developed across years amid the grief of repeated mining disasters, would be eliminated. Powerful West Virginia lawmakers are behind the measure, which marks a sad retreat from the statehouse safety concerns voiced in 2010 when the Upper Big Branch disaster took 29 miners’ lives.”
Appalachian politicians traditionally pander to coal owners, the paper said, “but this latest bout, launched in tandem with Mr. Trump’s fantasy job promises, can only leave remaining miners in greater danger on the job.”
Even if all those coal jobs did come roaring back, West Virginia would still want its miners to come home after every shift. West Virginia lawmakers, of all people in the world, should understand that and work to make it happen.
READ THE FULL ARTICLE HERE>>>>

www.DavittMcAteer.com Davitt McAteer & Associates
at 11:04 AM