Sago investigator will look at West Virginia mine disaster 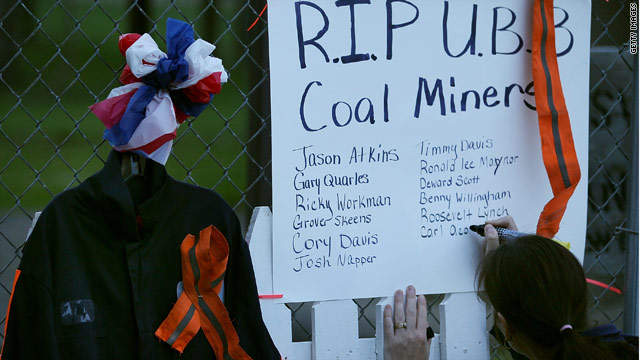 Mickie Green writes the names of 29 fallen coal miners on a small memorial in Whitesville, West Virginia.
STORY HIGHLIGHTS
Naoma, West Virginia (CNN) -- West Virginia's governor on Tuesday named a former head of the federal Mine Safety and Health Administration to lead a state investigation into last week's coal mine explosion that left 29 miners dead.
Davitt McAteer has overseen investigations into two previous mine accidents, the Sago disaster that killed 12 miners in 2006 and the fire at the Aracoma Alma No. 2 mine that left two workers dead. The West Virginia native served as the Clinton administration's assistant labor secretary for mine safety in the 1990s and is vice president of Wheeling Jesuit University.
"Davitt has the experience and knowledge to lead what will be a complex and extensive investigation into this horrible accident," Gov. Joe Manchin said in announcing McAteer's appointment. "We made tremendous progress in 2006 immediately following the Sago and Aracoma accidents, and I fully expect that we will learn even more from this and make dramatic changes to protect our miners."
The last bodies were recovered early Tuesday from the Upper Big Branch mine, the scene of the fatal explosion April 5. McAteer was critical of the mine's owner, Virginia-based Massey Energy, in the days after the blast.
"Some companies, and this appears to be one, take the approach that these violations are simply a cost of doing business -- it's cheaper for us to mine in an unsafe way or in a way that risks people's lives than it is for us to comply with the statutes, comply with the laws," McAteer said last week.
There was no immediate response from Massey Energy to McAteer's appointment, but Massey CEO Don Blankenship said last week that its safety history is among the best in the industry.
The Montcoal, West Virginia, mine received 458 citations from federal inspectors in 2009, and more than 50 of those were for problems that the operators knew about but had not corrected, according to federal mine safety records. Inspectors cited the operators more than 100 times in the first quarter of 2010, including six times for "unwarrantable failure" to correct violations.

Video: 'Heavy hearted community'
RELATED TOPICS
Massey subsidiary Aracoma Coal pleaded guilty to 10 criminal charges and paid a record $4.2 million in fines and civil penalties in connection with the January 2006 fire that McAteer investigated.
Manchin said the state owes an explanation for last week's disaster to the families of the men who died in the Upper Big Branch mine, "And we owe it to them and every coal miner working today to do everything humanly possible to prevent this from happening again."
Managers of two pension funds have called on Massey's board to oust Blankenship, who has been critical of mining regulations in the past.
"Massey's cavalier attitude toward risk and callous disregard for the safety of its employees has exacted a horrible cost on dozens of hard-working miners and their loved ones," New York state Comptroller Thomas DiNapoli said in a written statement Monday. He said Blankenship "must step down and make room for more responsible leadership at Massey."
New York's state pension fund, which DiNapoli manages, has about $14 million worth of Massey stock -- a tiny fraction of the company's estimated $4.3 billion market capitalization. But his call was echoed by the CtW Investment Group, which manages pension funds for about 6 million union workers. CtW blamed Blankenship's "confrontational approach to regulatory compliance" and the failure of the company's board of directors to challenge him for the disaster.
"Under Chairman and CEO Blankenship's domineering leadership, Massey Energy placed short-term production and profit goals ahead of prudent risk management, with devastating consequences for the corporation, its shareholders and employees," the fund wrote in a letter to the board. "In light of these consequences, the urgent need for new leadership is apparent."
The company has not commented on calls for Blankeship's ouster, but said safety "has been and will continue to be our top priority every day."
"We do not condone any violation of Mine Safety and Health Administration regulations, and we strive to be in compliance with all regulations at all times," it said in a written statement last week.
Bodies of the remaining victims were removed overnight, said Jama Jarrett, spokeswoman for the West Virginia Office of Miners' Health, Safety and Training.
The bodies of seven victims had been recovered shortly after the explosion, and 13 bodies were removed Sunday.
Until Sunday, U.S. flags on all federal buildings in the state will be kept at half-staff per a proclamation that President Obama signed on Monday.
The mining disaster was the worst in the United States since 1972, when 91 miners died in a fire at the Sunshine Mine in Kellogg, Idaho.
CNN's Rachel Streitfeld contributed to this report.
www.DavittMcAteer.com Davitt McAteer & Associates
at 7:04 AM