Most folks in and around Greater Fairmont still remember the horrific day, 50 years ago on Nov. 20, 1968 when the mammoth No. 9 mine in Farmington exploded, killing 78, 19 of whom are still entombed in the mine to this day.
Those who remember, say the explosion was large enough to be felt down U.S. Route 250 in Fairmont, almost 12 miles away. At the time, 99 miners were inside. Over the course of the next few hours after the explosion, 21 miners were able to escape the mine, but 78 were trapped. All who were unable to escape perished; the bodies of 19 of the dead were never recovered.
Today, one of those who remembers the mine explosion all too well is Joe Megna. At the time, as John Mark Shaver reported, Menga was only 15 years old and it was the last time he saw his father alive. 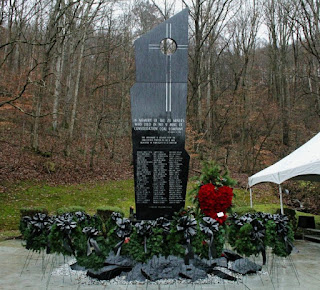 “It was my dad’s last shift of work,” Menga said. “He was retiring, and we were opening up a gas station in Worthington… My dad was talking about the Farmington No. 9 mine and how gassy it was and how they’re not taking care of it. He was going to get out. He took me to my friend’s house that night and he let us out and I told him, ‘Just don’t go to work. It’s your last shift. We’ll all go trout fishing.’ He said, ‘No. I owe them that much.’”
Although Menga’s father’s safety light was recovered by rescue teams, Emilio’s body was never found.
Those memories and so many more from other orphaned sons and daughters and the widowed wives have been woven into the rough, literal fabric in the lives of West Virginia coal miners. But as horrible as it was and to many, continues to be, the accident served as the catalyst for several new laws that were passed to protect miners.
Del. Mike Caputo, D-Marion, the fiery vice president of the United Mine Workers of America, District 31, told John Mark Shaver that although the disaster in Farmington wasn’t the worst ever recorded, it was the first to be shown on the evening news around the nation. For the very first time, people outside the Mountain State watched and wept with all of us.
“It made people say, ‘Wow. Do coal miners really have to work in those conditions,’” Caputo said. “To see those soon-to-be orphans waiting outside of the mines for news of their loved ones, it brought a whole new light to coal mining across this country.”
One month after the Farmington disaster, the U.S. Department of the Interior held a conference on mine safety. Stewart Udall’s opening speech specifically referenced Farmington and concluded, “Let me assure you, the people of this country no longer will accept the disgraceful health and safety record that has characterized this major industry.”
As a result of the Farmington disaster, the United States Congress passed the 1969 Coal Mine Safety and Health Act which strengthened safety standards, increased federal mine inspections and gave coal miners specific safety and health rights. In November of 1968 Davitt McAteer conducted a study of West Virginia mines after the Farmington disaster.
In 1990, the federal Mine Safety and Health Administration’s investigation into the accident concluded in part that the ventilation in the mine “was inadequate overall, and most probably non-existent in some areas.”
We can never forget the sacrifice those brave men paid with their lives on that chilly late November morning, 50 years ago.
We urge those interested, to attend the Farmington Mine Memorial service on Sunday, Nov. 18 beginning at 1 p.m.
CWV Media Business Editor John Dahlia can be reached at 304-276-1801 or by email at jdahlia@ncwvmedia.com.

Email ThisBlogThis!Share to TwitterShare to FacebookShare to Pinterest
Labels: Farmington's No. 9, The Fairmont News