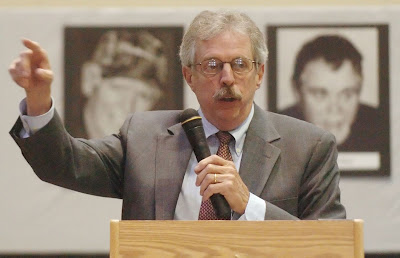 Longtime mine safety advocate Davitt McAteer is shown speaking at a public hearing held as part of his independent team’s investigation of the Sago Mine Disaster in 2006.
The death on Friday of another West Virginia coal miner is bringing more calls for stepped up action to respond to an increase in mining fatalities in the state.
Owen Mark Jones, 51, of Pickens, was the sixth coal miner to die on the job in West Virginia so far this year. That’s twice the number of miners who died in the state’s coal industry in 2016. Nationally, Jones was the 12th coal miner to die on the job so far in 2017, compared to eight last year.
“The number is increasing across the country,” said Davitt McAteer, a longtime mine safety advocate who ran the U.S. Mine Safety and Health Administration during the Clinton administration. “This doesn’t have to happen.”
At the request of then-Gov. Joe Manchin, McAteer led an independent team that investigated the Jan. 2, 2006, explosion at the Sago Mine in Upshur County. Owen Jones was working there at the time and was among the miners who tried to rush back into the mine to try save their coworkers. Twelve miners, including Owen Jones’ brother, Jesse Jones, died. A great-grandfather of the Jones brothers had also died in an earlier mine explosion.
“Does the Jones family owe us something in West Virginia, or do we owe them something?” McAteer said Saturday. “Where is the outrage? Political leaders should be saying that this doesn’t have to happen.”
Details of what happened at the Pleasant Hill Mine on Friday remained sketchy on Saturday, while state and federal investigators continued their investigation.
Jones was “fatally injured while working” at the Pleasant Hill Mine near Mill Creek in Randolph County, according to a press release from Metinvest, a Ukranian metals and mining conglomerate whose subsidiary, Carter Roag Coal Co., operates the mine.
A production superintendent who called the state’s mine emergency hot line to report the death said that Jones’ body was found outside of the mine in a coal storage pile at about 2:15 p.m. Friday and that Carter Roag officials “have no idea” what happened. The superintendent said he didn’t know if Jones was working outside just prior to his death or if his body was carried outside on a conveyor belt into the coal pile.
“Our loader man called us and said he was moving coal and he was in the coal pile,” the superintendent told the state hot line operator.
In a prepared statement, Gov. Jim Justice said that he and his wife were “deeply saddened” by the news of Jones’ death and that it was “especially heartbreaking to learn that this family has been devastated twice in the last 11 years by losing loved ones in the mines.”
Butch Antolini, the governor’s communications director, did not respond to a request for information about what new mine safety initiatives Justice was launching in response to the rise in coal-mining deaths in the state.
One of the state’s coal mining deaths this year occurred at a preparation plant owned by the governor’s family. The plant operating company, Justice Low Seam Mining, is appealing state citations issued after the death.

www.DavittMcAteer.com Davitt McAteer & Associates
at 10:44 AM