Expert: Chilean Mine 'Not Unlike Being In A Prison', WBUR Boston's NPR News Station, Aug 23 2010

Expert: Chilean Mine 'Not Unlike Being In A Prison'

Davitt McAteer, a former head of the government's Mine Safety and Health Administration, told NPR that discussions are taking place around the world to see if advanced boring equipment can be rushed to Chile to speed up the rescue of 33 trapped miners. 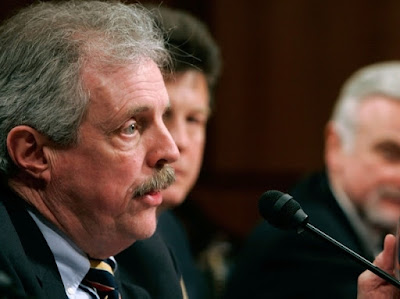 Davitt McAteer during a Senate Appropriations Committee hearing on mine safety in January 2006. (Getty Images)
Sunday's discovery of the miners alive and well after 17 days underground is "absolutely miraculous," he said.
"Miners are resilient as a general rule, but that's a long time to be underground," McAteer said.
And it's still likely to be a lot longer.
The Chilean engineers in charge of the rescue near Copiapo, Chile, said it would take "at least 120 days" to bore a shaft big enough to pull the men to the surface one by one.


McAteer -- who headed the MSHA under President Clinton and is currently leading an investigation into the Big Branch mine disaster that killed 29 coal miners in West Virginia earlier this year -- said the four-month scenario "reflects a rather basic technology that is used in mining."

He said discussions are going on in the U.S., Western Europe and South Africa to see if higher-capacity drilling equipment could get the miners out sooner.
"We're making some calls this morning to see what we can do," he said.
"Whether it's weeks or months, it's going to be a difficult time" for the miners, he said.

In the past, McAteer said, miners awaiting rescue have passed the time playing cards and doing crossword puzzles, but none have had to wait as long as the Chilean miners might have to.
"With modern technology, the interesting thing will be: do we put televisions down there, do we put videos down there to give them something to do."
He said the miners will have to be careful to reduce the inevitable tensions that arise from their confinement in close quarters and to keep up a good mental attitude.
"I have no doubt there will be counselors there to walk them through this," McAteer said. "It's not unlike being in a prison."