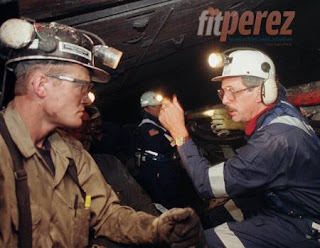 A study released Thursday has found that black lung disease in coal miners is on the rise in the US after significantly declining since Congress passed tougher mine safety laws!
The findings came after an investigation was ordered by West Virginia governor Joe Manchin to look into the the worst U.S. coal mining disaster in four decades in the state.
75% of the 29 miners that tragically died in in the blast at the Upper Big Branch mine in West Virginia last spring showed signs of black lung!
Davitt McAteer, who headed the investigation, calls the sample "a terrifying number, an astonishing number, particularly given the age of some of these individuals."
With the rising cost of coal, mine operators are being accused of sacrificing safety in favor of profits. Specifically, the investigation pointed at the company behind West Virginia disaster, Massey Energy, saying "the operator's commitment to production comes at the cost of safety."
Not cool! Let's hope coal mining companies get their acts together or the government cracks down on those putting profits ahead of employee safety!
[Image via AP Images.]
http://perezhilton.com/tag/coal/#.V3pk6jeWU5Q
Tags: black lung disease, coal, congress, disaster, disease, energy, miners, scary, west virginia
www.DavittMcAteer.com Davitt McAteer & Associates
at 6:33 AM