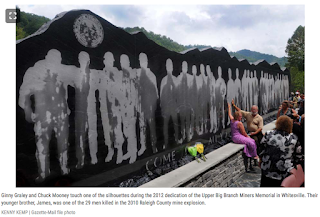 The Mine Safety and Health Administration didn’t do enough to stop the Upper Big Branch Mine disaster, a lawsuit filed by one of the miners’ widows says.
Carolyn Diana Davis filed the lawsuit in the U.S. District Court’s Southern District of West Virginia, in Beckley, under the Federal Tort Claims Act on Thursday, the eighth anniversary of the explosion that killed 29 miners at the Upper Big Branch Mine, in Raleigh County. Her husband, Charles Timothy Davis, worked at UBB, then operated by Performance Coal Co., a subsidiary of Massey Energy Co. His was one of the four bodies found by a rescue crew in the headgate entry to the longwall.
The lawsuit, in which the United States is a defendant, says MSHA didn’t do its job as a watchdog agency to prevent the disaster at UBB and was negligent in its enforcement of safety measures at the mine.
“The Plaintiff reasonably relied upon the United States to undertake its inspections and enforcement actions in a competent and non-negligent manner, and that reliance ultimately contributed to the wrongful death of Mr. Davis,” the lawsuit states.
Davis’ lawyers emphasized that the lawsuit doesn’t side with Don Blankenship, former Massey Energy CEO, who has repeatedly insisted that federal regulators — not he nor his former company — are at fault for the disaster. Blankenship spent a year in federal prison for conspiring to violate mine safety laws, and is now running for a U.S. Senate seat in West Virginia.
“Lest there be any doubt, this lawsuit in no way supports Don Blankenship’s ‘theory’ regarding the ‘real cause’ of the UBB explosion,” Bruce Stanley, Davis’s attorney, said in a statement.
Amy Louviere, an MSHA spokeswoman, would not comment on the lawsuit.
The explosion at UBB happened around 3 p.m. April 5, 2010, during a shift change, when a spark ignited a pocket of methane, causing massive explosions in the mine. Federal investigators say an accumulation of coal dust exacerbated the explosion, which blasted through more than 2 miles of mine workings.
The lawsuit cites reports from the Governor’s Independent Investigation Panel, selected by then-Gov. Joe Manchin, which said MSHA knew about UBB’s faulty ventilation system and ignored warning signs.
The panel, led by former MSHA head J. Davitt McAteer, found four specific flaws: UBB’s history of methane-related events; 40 revisions to the mine’s ventilation plan drafted by UBB management and given to MSHA; the agency’s inability to collect rock dust samples; and its “inability to connect the dots of the many potentially catastrophic failures taking place at the mine — especially the mine operator’s failure to properly ventilate the mine, to control methane, to apply sufficient amounts of rock dust,” the report states.
A federal Independent Panel Assessment also reported that MSHA didn’t adequately inspect the mine or take enough action at UBB. By better understanding its own policies, MSHA could’ve possibly stopped the disaster, the panel concluded.
“The IPA concluded that MSHA failed to adequately perform its duties at UBB, and that this failure had a causal relationship to the explosion,” the lawsuit states.
The lawsuit argues that the violations of federal mine safety regulations “were not only a breach of the United States’ duties to the Plaintiff, but were violations of federal laws, regulations and/or policies mandating the manner in which MSHA personnel were required to administer the provisions of the Mine Act.”
“This lawsuit is based upon the simple fact that, from the Aracoma mine fire in 2006 until the UBB disaster in 2010, MSHA knew in painstaking detail how Don Blankenship ran his longwall operations, and despite that knowledge, allowed a completely predictable result — the massive explosion that laid 29 miners in their graves,” Stanley said. “But if Don Blankenship truly does possess real evidence that implicates MSHA in the explosion, then he needs to ‘do the right thing’ and get off the campaign trail and get back in the courtroom.”
Reach Kate Mishkin at kate.mishkin@wvgazettemail.com, 304-348-4843 or follow @katemishkin on Twitter.
READ THE STORY HERE>>>
www.DavittMcAteer.com Davitt McAteer & Associates
at 6:37 AM