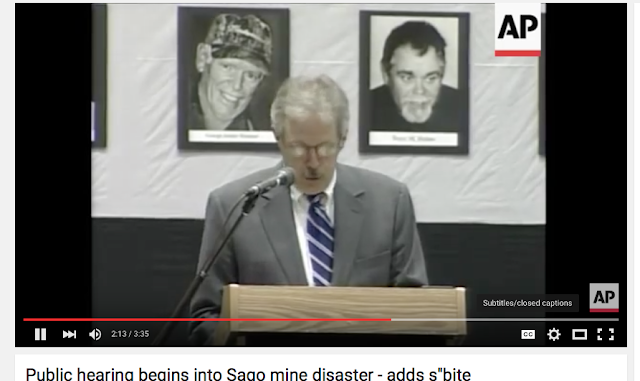 WATCH THE FULL VIDEO HERE >>>
Published on Jul 28, 2015
Buckhannon, West Virginia - 2 May 2006
1. Wide shot of hearing
2. Various of family members at hearing
3. SOUNDBITE: (English) Pam Campbell, Sister-in-Law of miner Marty Bennett
"Today, not only do I speak for my sister and my nephew and my entire family, I''m going to take it upon myself to also speak for the rest of these families. We expect to get answers to these questions and so far, these answers have not come."
4. Cutaway of families applauding
5. SOUNDBITE: (English) John Groves, Brother of miner Jerry Groves
"We assure you, Mr. Politicians, that we''re not going to let this rest. We know in our hearts this can be corrected and it needs to be done immediately, it needs to be done now. And it''s on you to make the changes. We rely on you to make for sure it can''t happen again. People''s lives have been changed forever because of what''s happened and you can''t let this happen again. No one needs to go through this ever again."
6. Tilt up of tearful family members at hearing
FILE: Sago Mine, West Virginia - 3 January 2006
7. Various night shots of rescue mission being carried out
Buckhannon, West Virginia - 2 May 2006
8. Wide of Davitt McAteer speaking at hearing
9. SOUNDBITE: (English) Davitt McAteer, Hearing Chairman and Special Adviser on Mine Investigation
"They want to know that their men, their husbands, fathers, sons, fiancees, and friends did not die in vain. They have the right to expect those in authority to do right by their men. They have the right to participate in this hearing and they have the right to insist that their questions be answered. Most of all, they have a right to expect that everything necessary will be done to improve mine health and safety conditions in the United States so that the Sago Mine disaster will be remembered as a turning point in this country''s history."
10. Cutaway of audience
FILE: Sago Mine, West Virginia - 3 January 2006
11. Night shot of rescue crews walking near mine
Buckhannon, West Virginia - 2 May 2006
12. Man demonstrating how to use rescuer
13. Family members watching
14. Wide of news conference
15. SOUNDBITE: (English) Ben Hatfield, International Coal Group (ICG) President
"I don''t believe we did anything wrong that resulted in this accident, that''s just the truth. Now there are things about the aftermath of this accident that we could have done better, miscommunication is the key one, that''s the one that I personally have to take responsibility for, but with respect to the accident that occurred there''s no violation of the regulations no lapse in maintenance of infrastructure that points in any fashion to a cause of connection with the accident."
16. Press cutaway
17. Hatfield leaving
STORYLINE:
The families of 12 miners who perished deep inside a West Virginia mine are challenging US regulators to improve safety in the industry.
With photographs of their lost husbands, sons and brothers in hand, the relatives opened two days of public hearings into the January 2 disaster at the Sago Mine.
They offered tearful testimony and demanded answers to the worst mining accident in the US since the deaths of 13 Alabama miners in September 2001.
John Groves'' brother Jerry was among the eleven men who survived the explosion but died of carbon monoxide poisoning while waiting to be rescued.
Groves said he and the other family members will not let this matter rest and he called upon the lawmakers present at the hearing to help improve safety immediately.
The miners'' families wanted to know whether lightning caused the blast inside the mine that killed one of the crew.
Davitt McAteer, a former Mine Safety and Health Administration director, is leading the hearing and the state investigation into the disaster.
Keyword- mine -disaster